[T]he danger of [sharing posts] is getting swept up when there’s this frantic information exchange, and you find yourself endorsing values and agendas that you would not normally agree with, and that’s a little bit scary. But I think there’s also potential there. This is not to demonize social media as a site of exchange—I think it has tremendous potential. The question here is how to have meaningful conversations. —Yanira Rodriguez 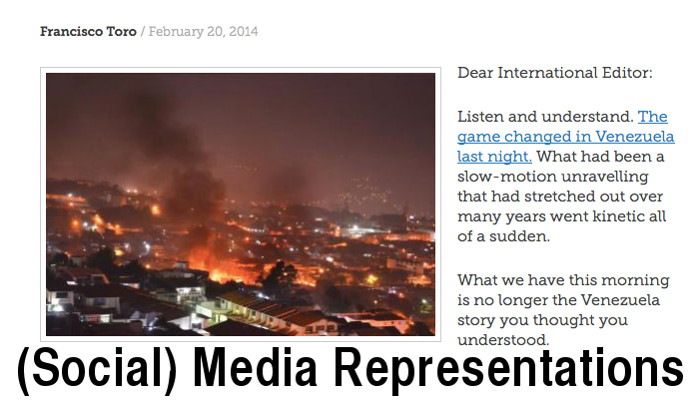 “The Game Changed in Venezuela Last Night” via Caracas Chronicles

Episode 22 features a conversation between Ben Kuebrich and Yanira Rodriguez about the representations of the Venezuela protests earlier this year, focusing particularly on how the protests and political situation was represented through the February 20th blog post, “The Game Changed in Venezuela Last Night – and the International Media Is Asleep at the Switch.” Kuebrich and Rodriguez raise questions about international news coverage, the representation and circulation of news on social media, and how we can read news articles more critically.

The music sampled in this podcast is “As Colorful as Ever” by Broke for Free, “Adventure, Darling” by Gillicuddy, and “Y por qué no hacer una canción de Facebook y cantarla en un camión?”